Sofirn has released the Sofirn TF84 Tactical Flashlight, an updated C07 with new specifications and a new name!  Read on for testing!

Here’s a link to the Sofirn TF84 Tactical Flashlight page.

There is just one version of the Sofirn TF84 flashlight, but it’s available at different kit levels.

On the whole, the Sofirn TF84 is a good light.  I’m pleased that it uses the Samsung LH351d emitter and seems to be neutral white.  The throw is good, and I like the beam profile.  The output is way below the specification though, which is quite disappointing.  Not that the output is bad, or too low, but the spec just seems unnecessarily inflated.

^ Measurement disclaimer:  I am an amateur flashlight reviewer.  I don’t have $10,000 or even $1,000 worth of testing equipment.  I test output and such in PVC tubes!!  Please consider claims within 10% of what I measure to be perfectly reasonable (accurate, even). 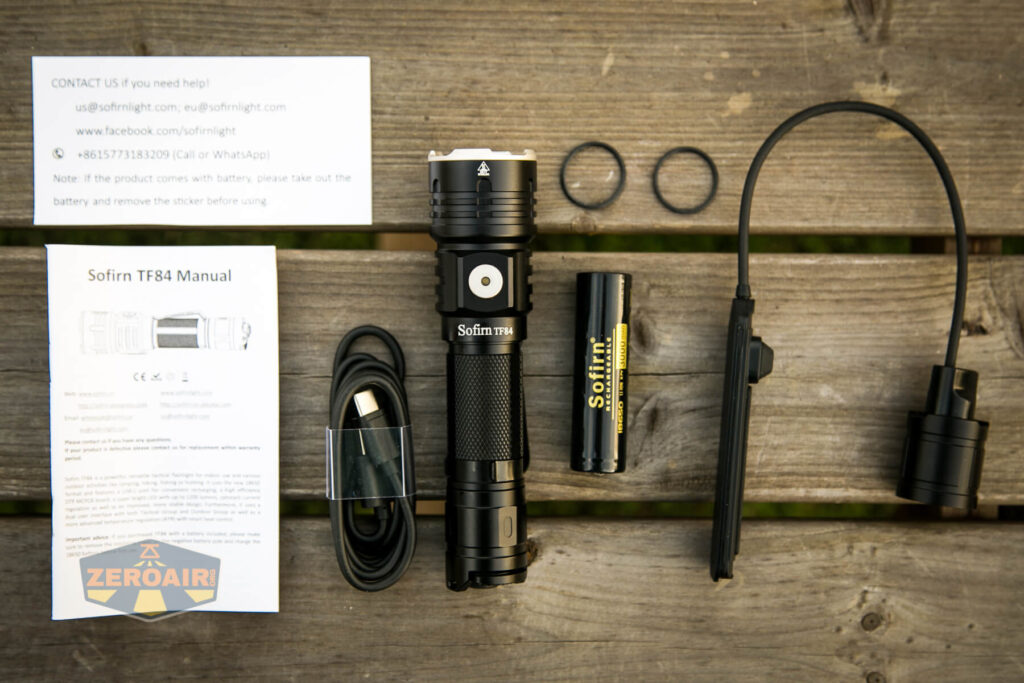 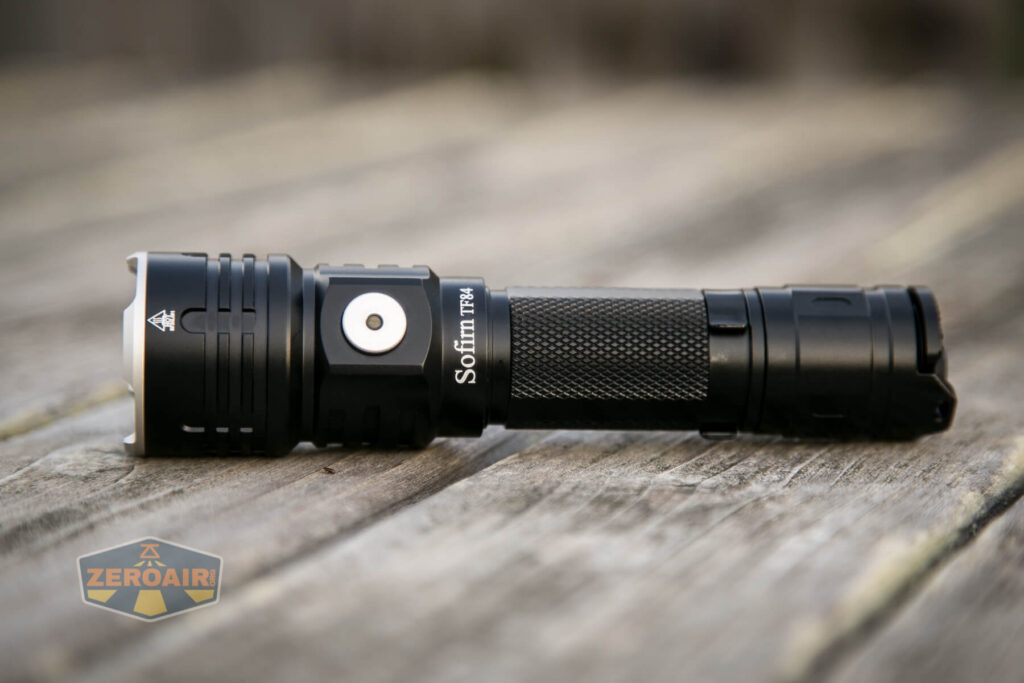 The build quality of the Sofirn TF84 is good.  It doesn’t stand out for anything in particular, but the light does seem solid.

The bezel seems to be stainless and has a few big teeth. 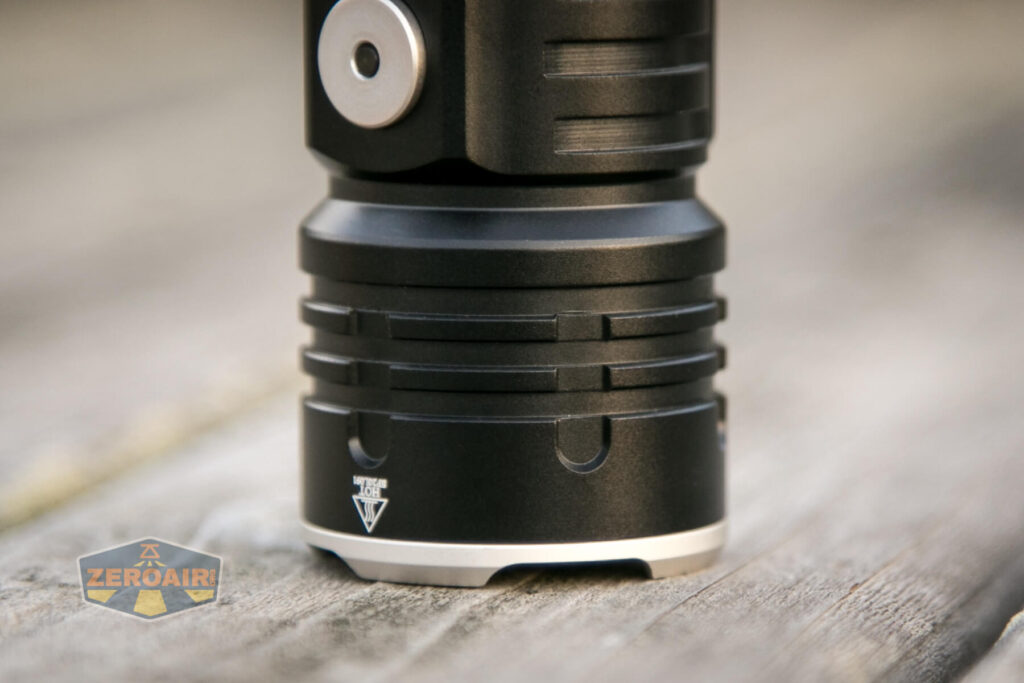 Around both the bezel and head there are minimal-depth cooling fins, too.

Just the cell tube has knurling – there is none on the tailcap. 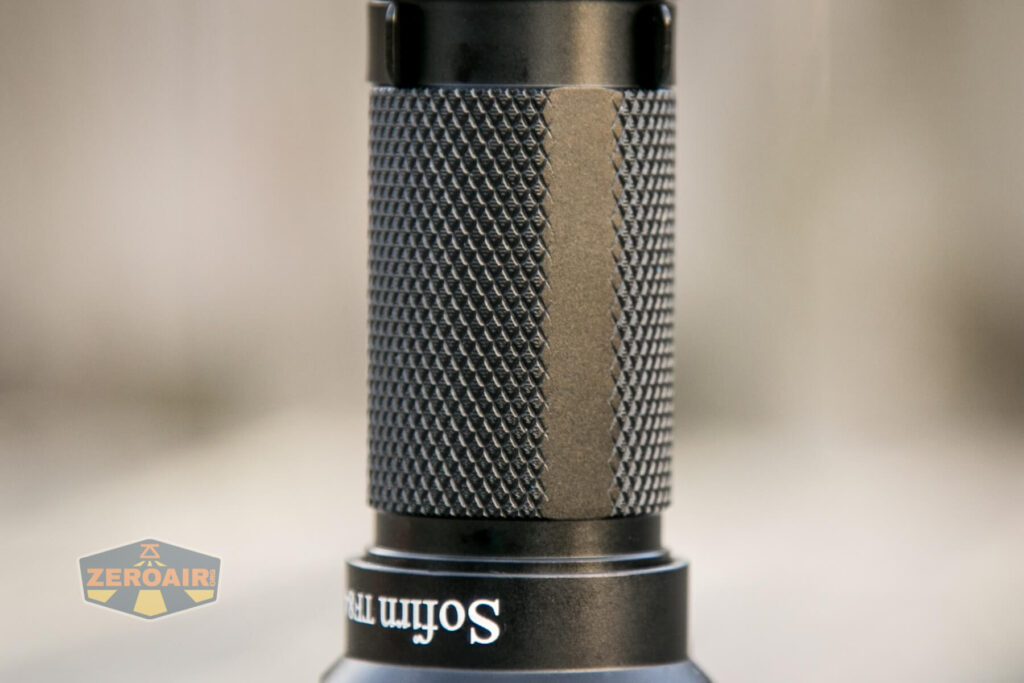 I was unable to remove the head from the cell tube, so just the tailcap comes off.  This reveals smooth unanodized threads, which are square-cut and of usual length. 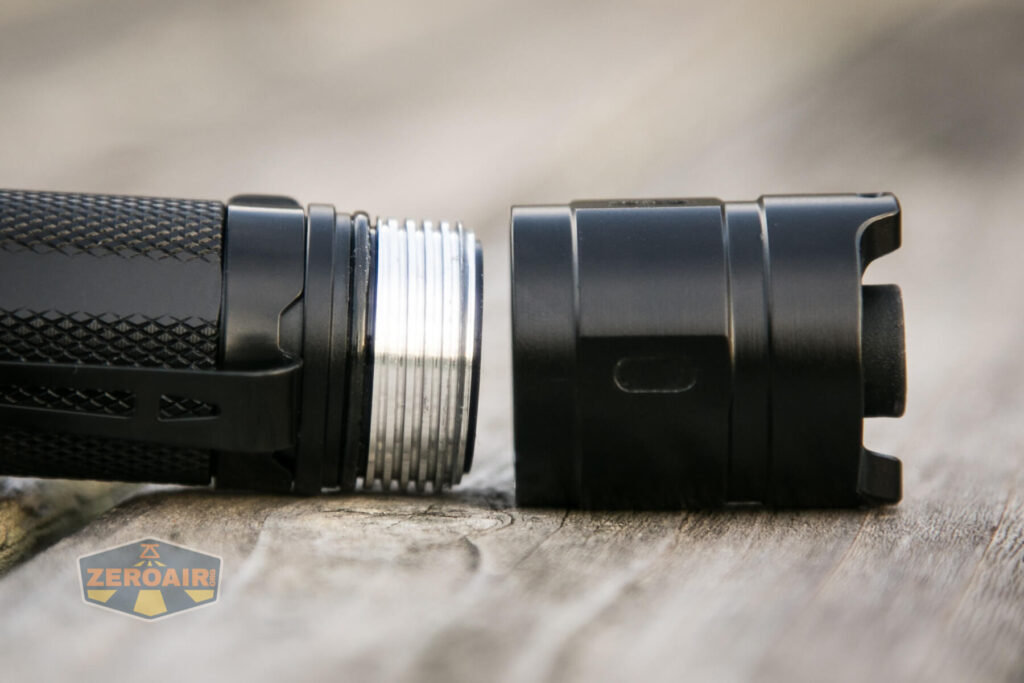 Both head and tail have springs, as you’d expect on a tactical light. 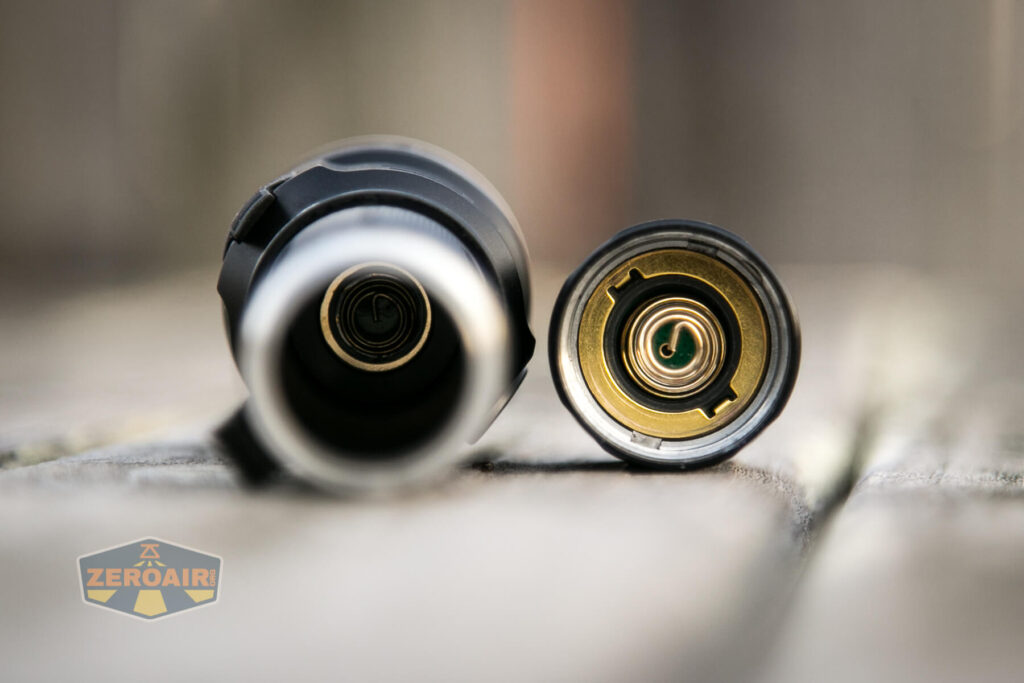 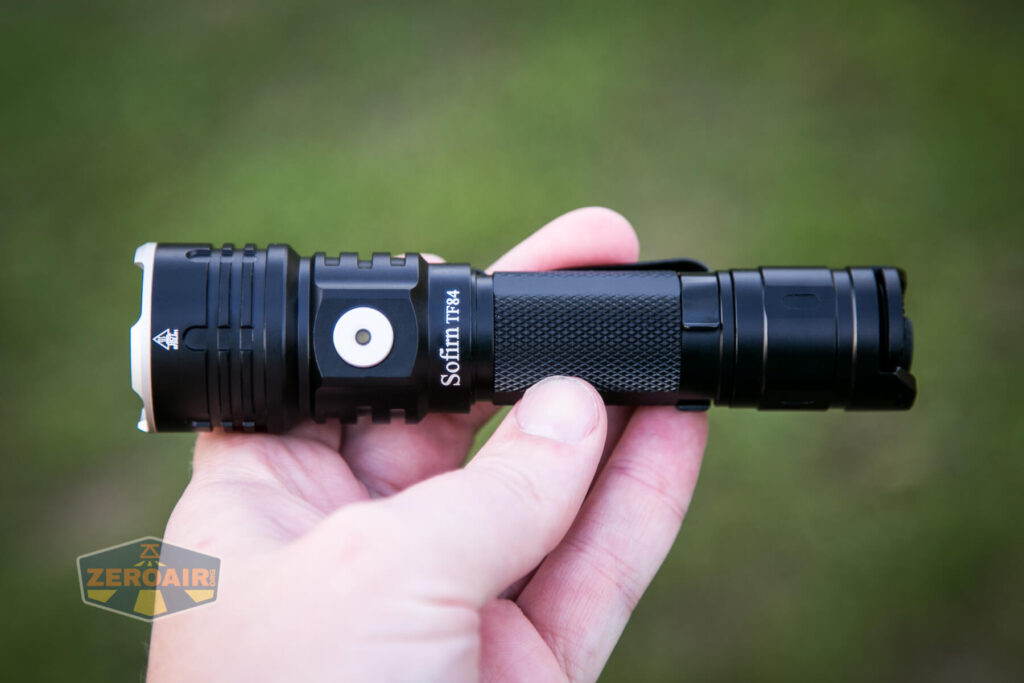 And here’s the light beside my custom engraved TorchLAB BOSS 35, an 18350 light.  I reviewed the aluminum version of that light in both 35 and 70 formats. 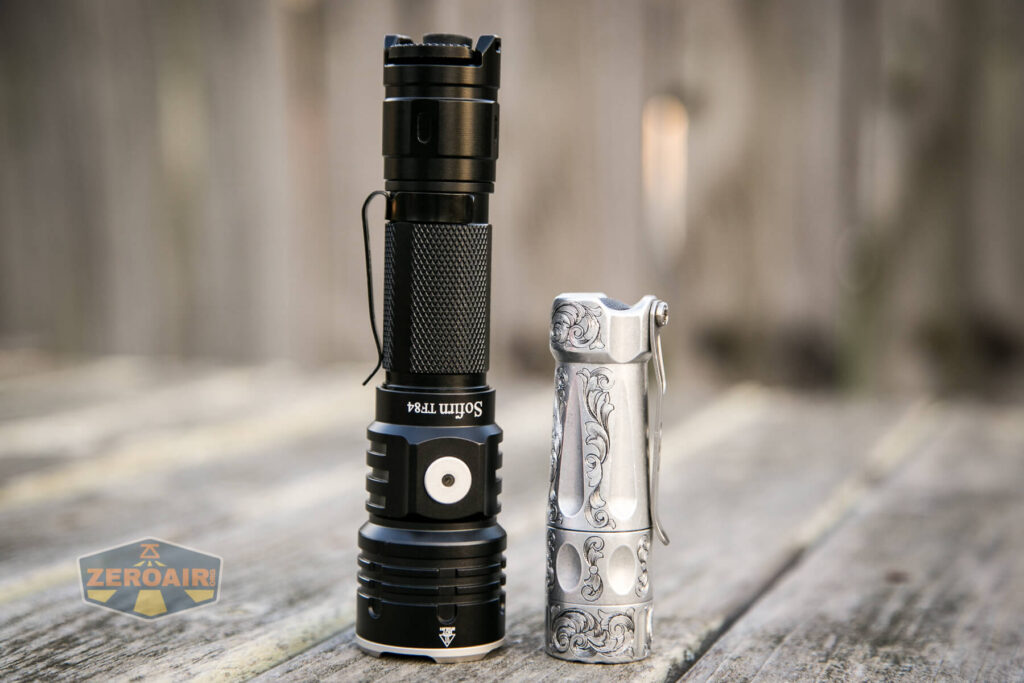 Included and attached to the light is a friction-fit pocket clip.  It’s a standard clip – nothing special and a little thin.

Nothing else is included for carry of the Sofirn TF84 tactical flashlight.  There is no pouch.

Power is provided by a single lithium-ion cell.  If you buy the package, you’ll get a 3000mAh button top 18650, which is perfectly good for this flashlight. 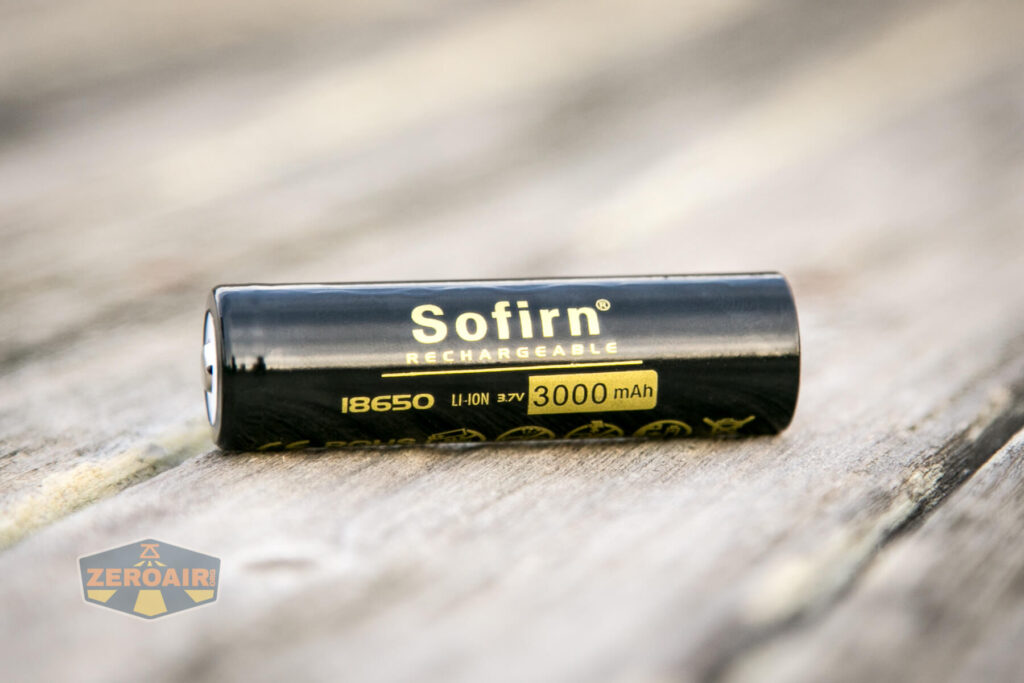 It’s a button-top cell.  Since there are springs on both ends, I think any type 18650 will work fine.  It tested with an unprotected flat top and didn’t have any issues. 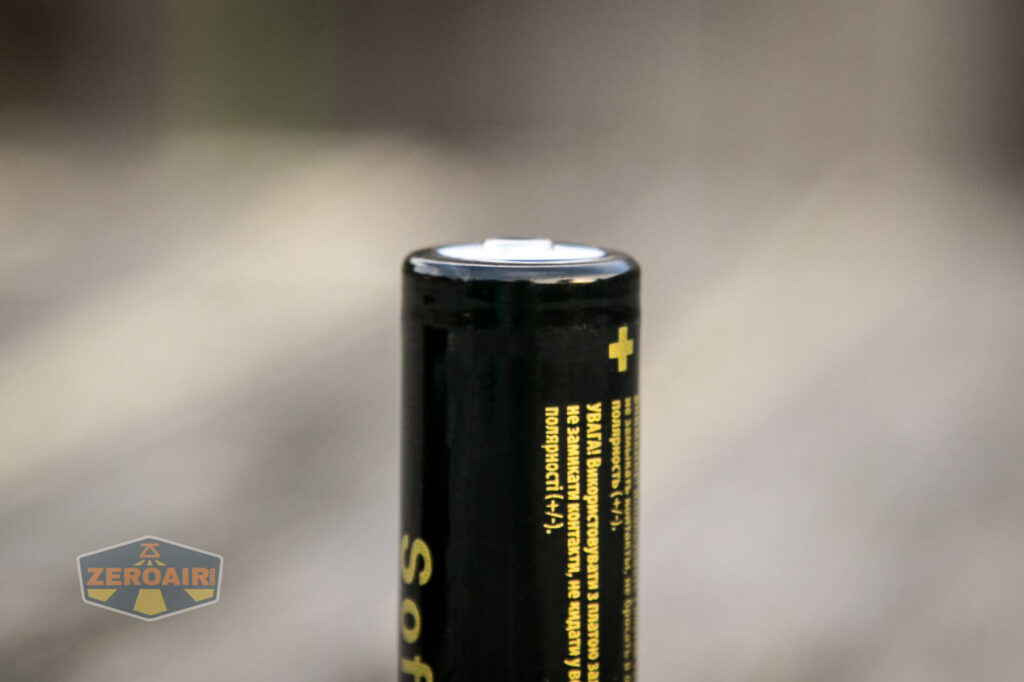 The cell fits into the light in the usual way – positive terminal toward the head. 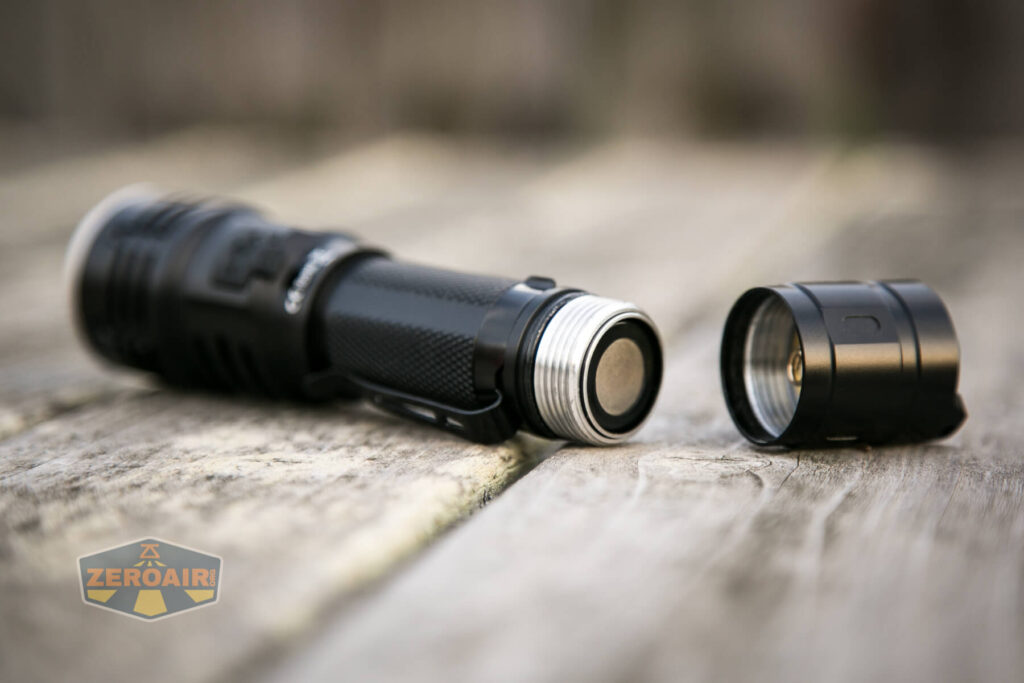 Here are a couple of runtimes.  Performance is “eh” (or “bad” if you’re thinking about the specifications.)  The initial output is around 600 lumens, which is just over half the claim.  I can deal with that – the throw measurement is met.  However, after that, the light just drifts downward in output as the cell voltage drops.  That is not an ideal scenario. 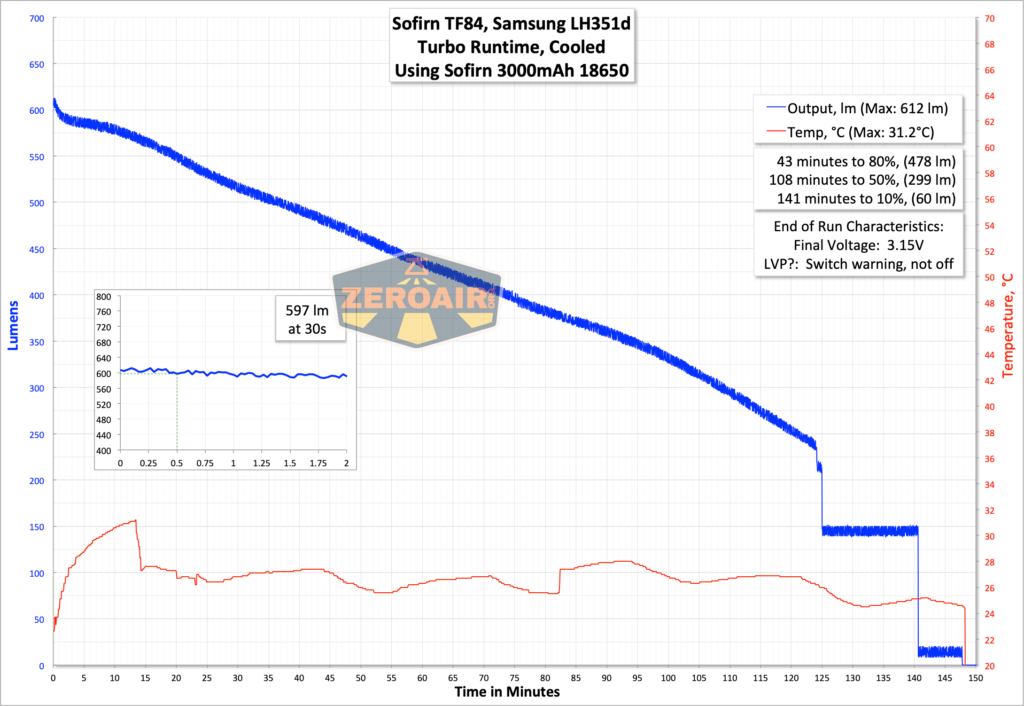 Fortunately, the output on High is much more stable.

After the light steps down to low output, the switch blinks red, then the light shuts off.  On bench power, I tested those values at 2.9V and 2.6V, respectively.

The Sofirn TF84 has built-in charging.  There’s a USB-C port in the head.

An appropriate cable is included – USB to USB-C.

I also tested and the light will charge at 5V with C to C, which is nice.  The currents are about the same as above.  Here’s a graph of that: 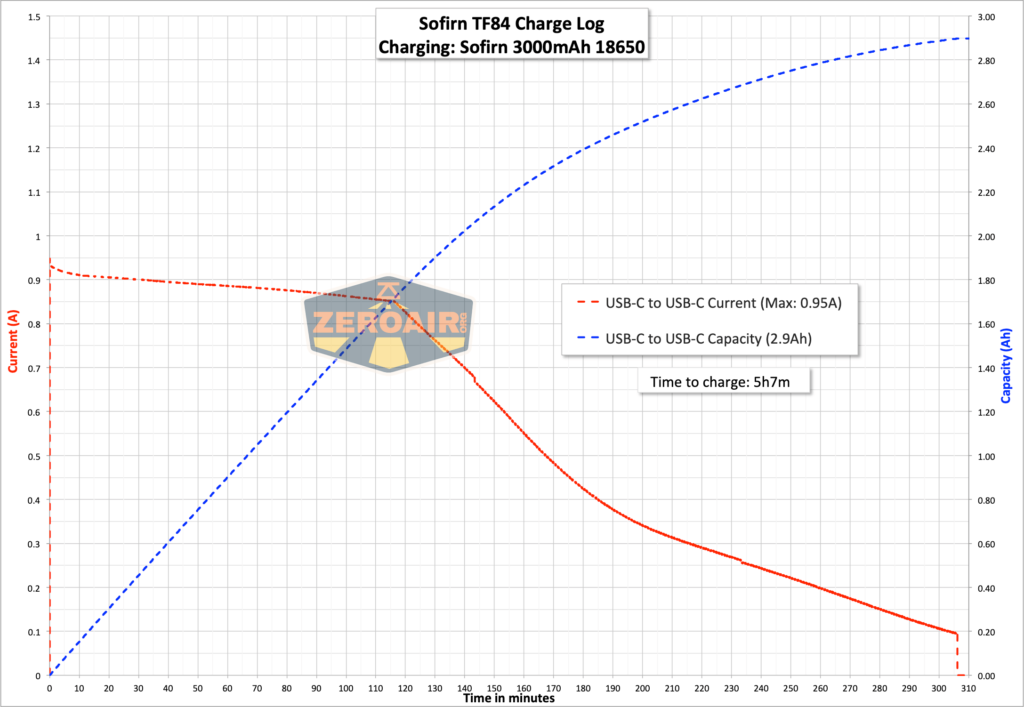 No PWM on any mode is seen.

For reference, here’s a baseline shot, with all the room lights off and almost nothing hitting the sensor.  Also, here’s the light with the worst PWM I could find.  I’m adding multiple timescales, so it’ll be easier to compare to the test light.  Unfortunately, the PWM on this light is so bad that it doesn’t even work with my normal scale, with is 50 microseconds (50us).  10ms.  5ms.  2ms.  1ms.  0.5ms.  0.2ms.  In a display faster than 0.2ms or so, the on/off cycle is more than one screen, so it’d just (very incorrectly) look like a flat line.  I wrote more about this Ultrafire WF-602C flashlight and explained a little about PWM too.

There are plenty of options for switching this light!  Primarily there is the tail switch setup – a mechanical clicky, with a paddle switch beside it. 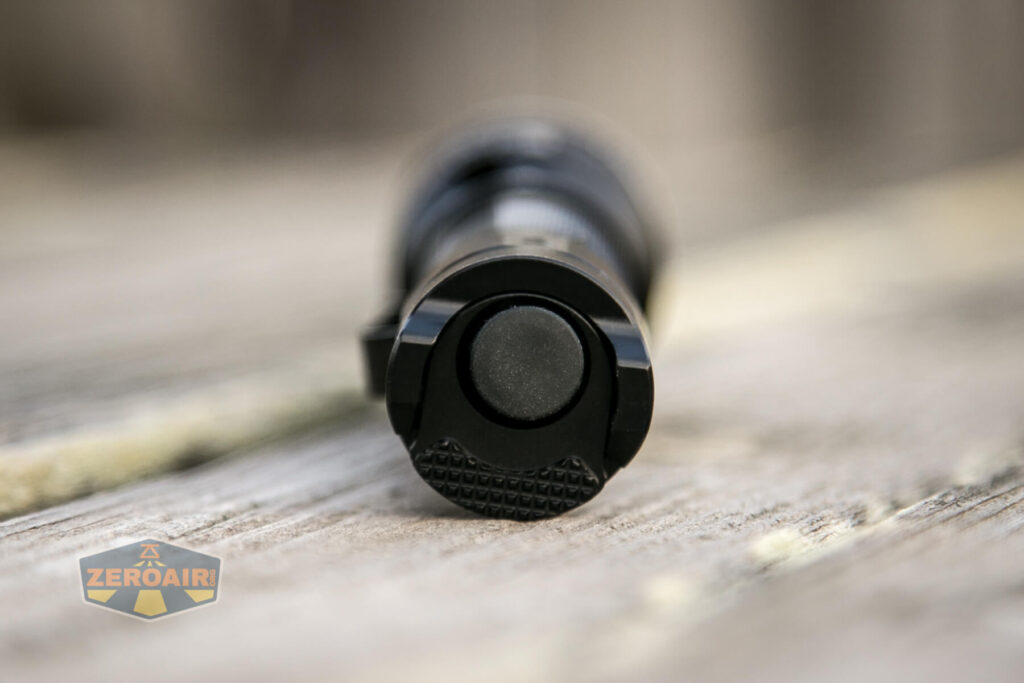 There’s an indicating e-switch on the head, as well.  This is exactly opposite to the charge port.  They’re easy to differentiate – one’s a hard plastic round switch, and one is a softer silicone part. 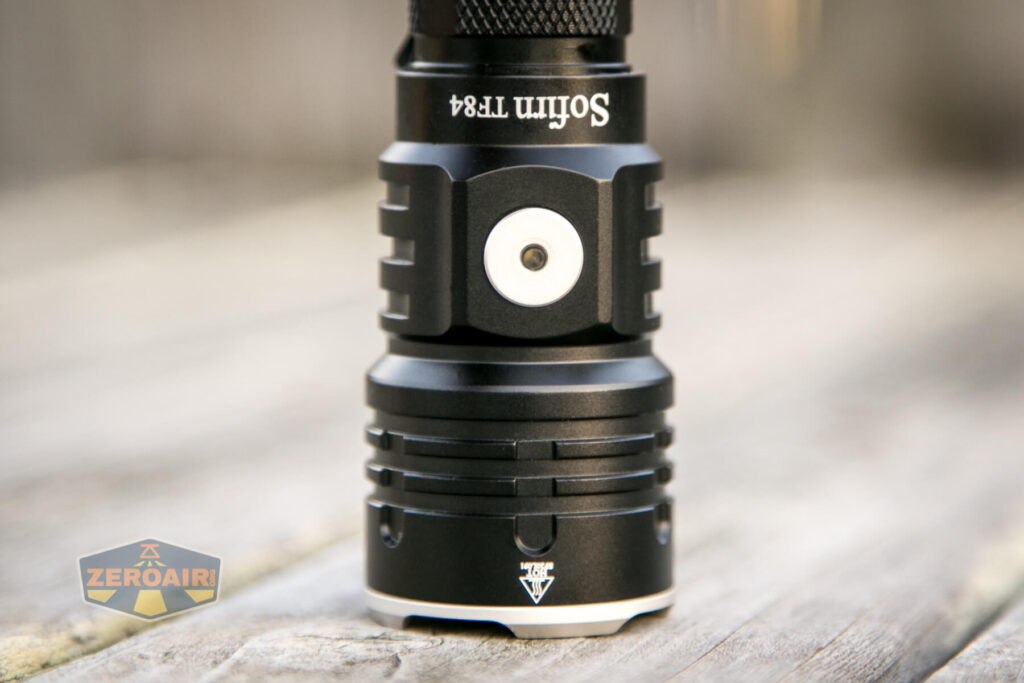 The indicating switch can be red or green.  As seen below in green, the light is indicating directly after power on, that the cell is “charged” state. 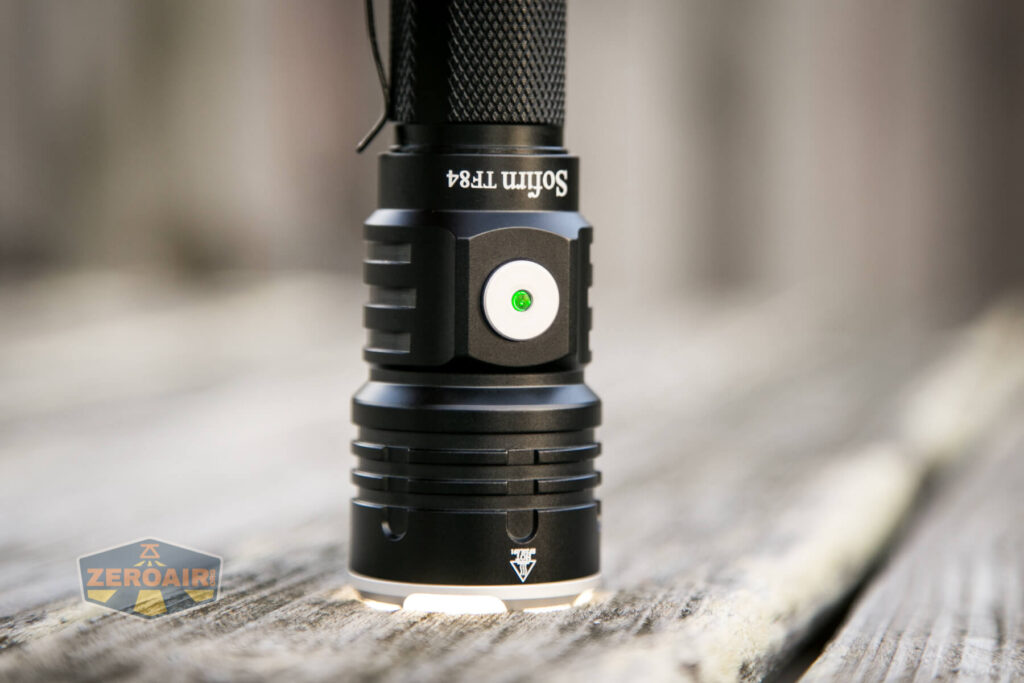 There’s also a remote switch (option).  Interestingly, and I think this is the first time I’ve seen this, that bigger switch there seems to actually be a mechanical switch! 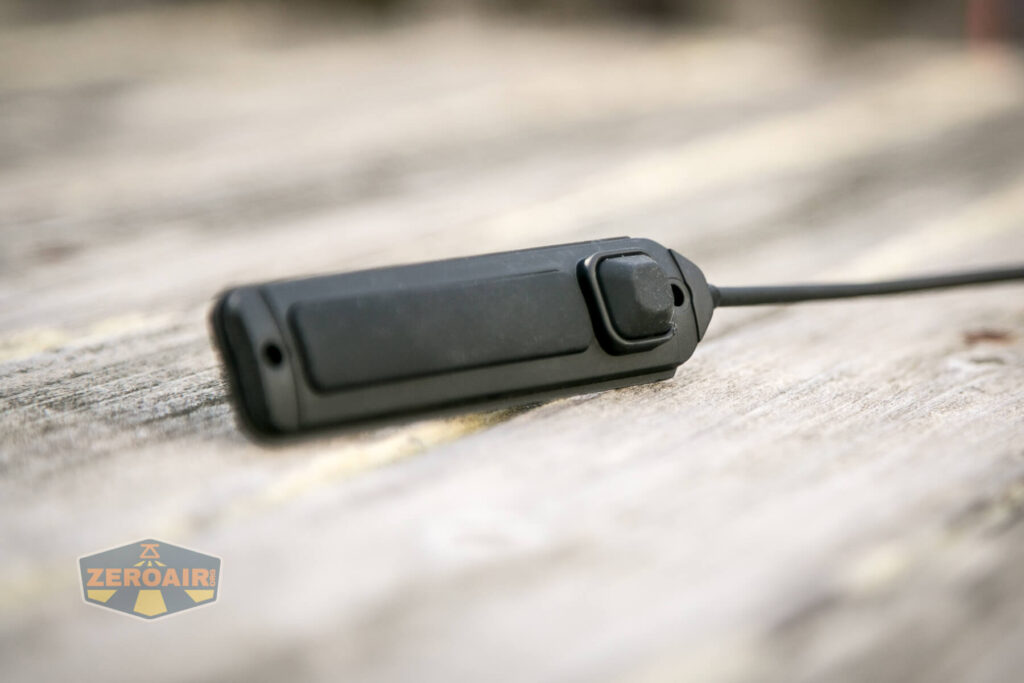 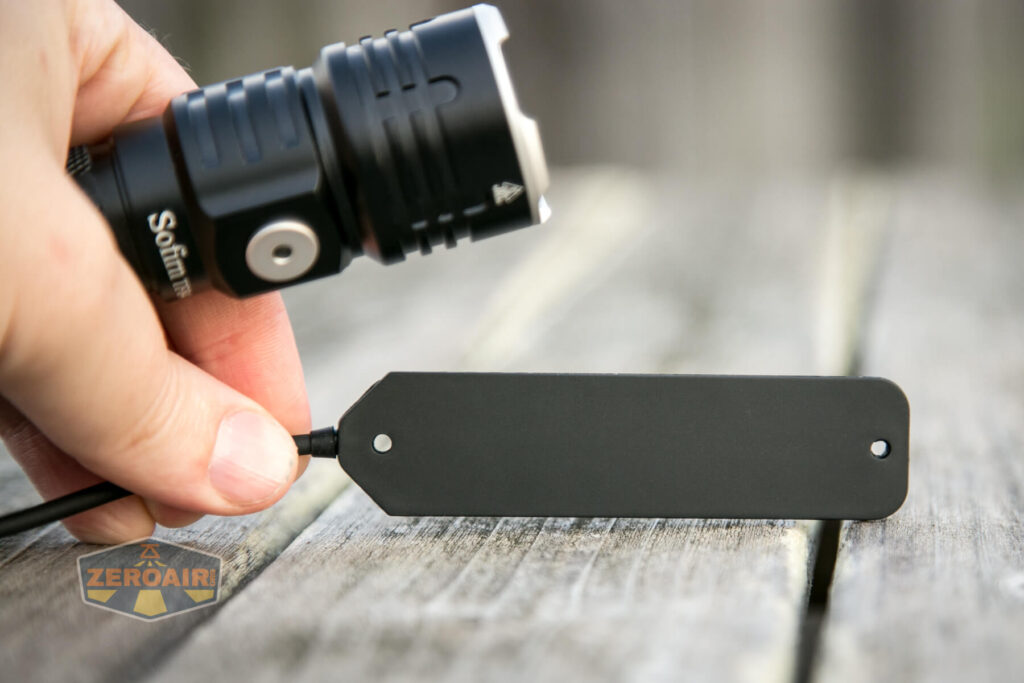 Even without the remote switch (which we’ll cover below), there are two mode groups.  One is the “Outdoor Group” (this is the default) and the other is the “Tactical Group.”  To switch between these groups press the paddle switch (the manual calls this the “tail mode switch”) and the side e-switch at the same time, for around 3 seconds.  The light will change groups.  Three blinks indicate you’ve entered the Outdoor group.  One blink indicates you’ve entered the Tactical group.

Here’s a UI table for the Outdoor Group!

Here’s a UI table for the Tactical group!

There’s really not that much difference between the two groups.  Mainly I think it’s that you pare down all the extra modes to just Turbo and Medium.  But you maintain access to moonlight, and pretty much all the other stuff is the same, so….

Now, regarding this remote switch.  That switch literally exactly replaces the entire tailcap and both switches on the tailcap.  So everything about the table above regarding either tailswitch completely translates to the remote switch.  The bigger, square switch is the “Tactical Main Switch” and the big flat part is the “Mode Tail Switch (paddle switch).”  So that part works quite well.

The emitter used in the Sofirn TF84 tactical flashlight is surprisingly a neutral white Samsung LH351d.  Sofirn went with a smooth reflector, and this one is a deep fairly wide reflector. 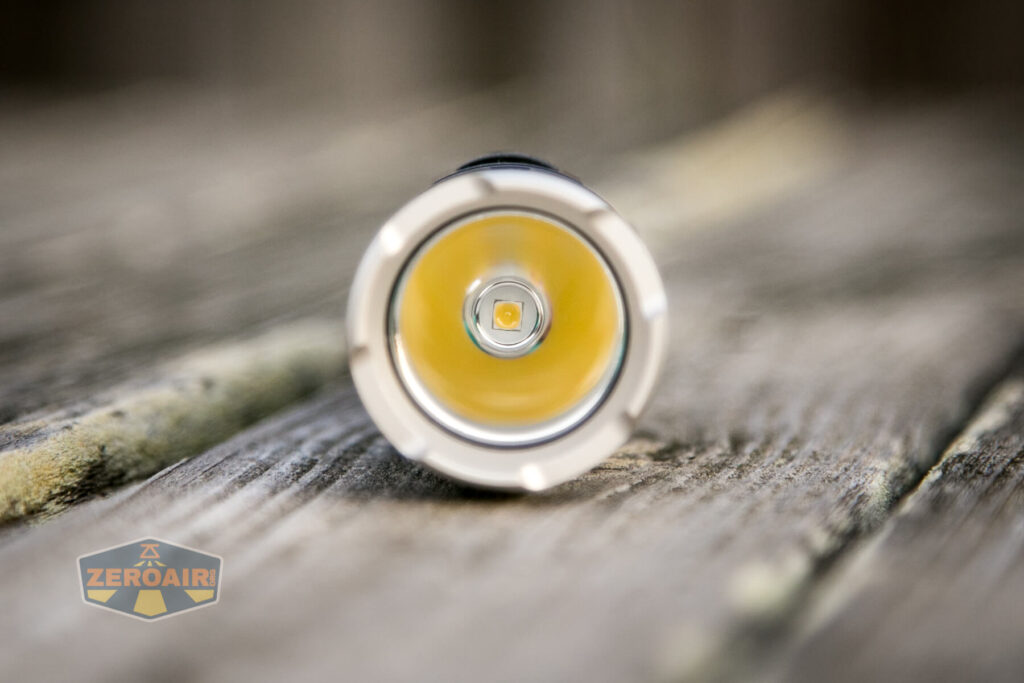 The bezel is crenelated, so light escapes when headstanding. 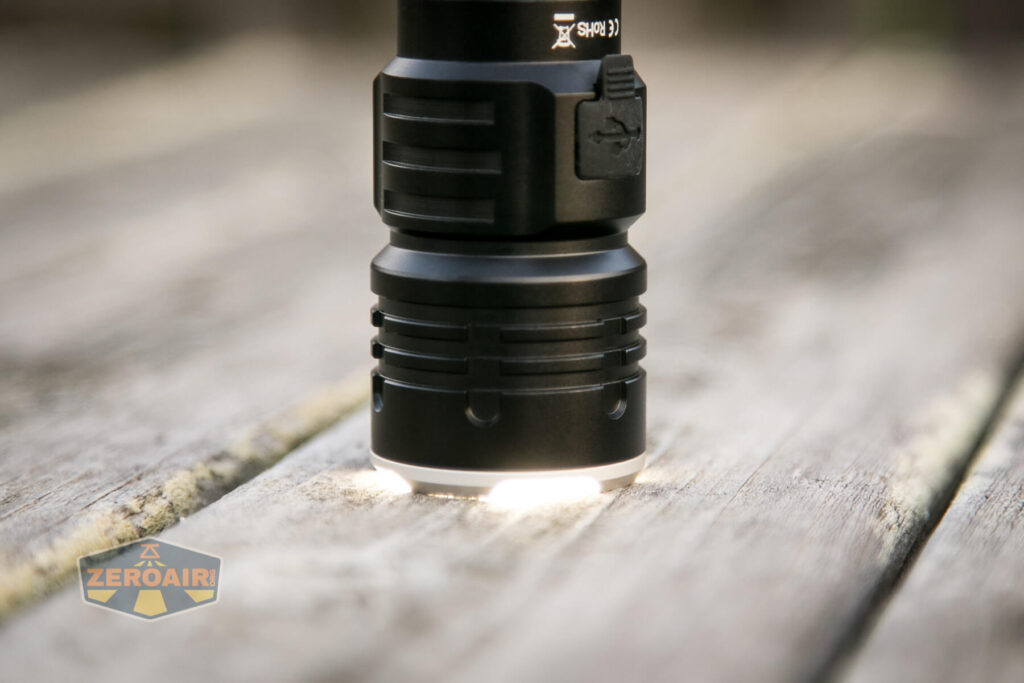 The beam is very throwy, but with a bit of spill.  There’s a nice tight hotspot, which seems ideal for a tactical flashlight. 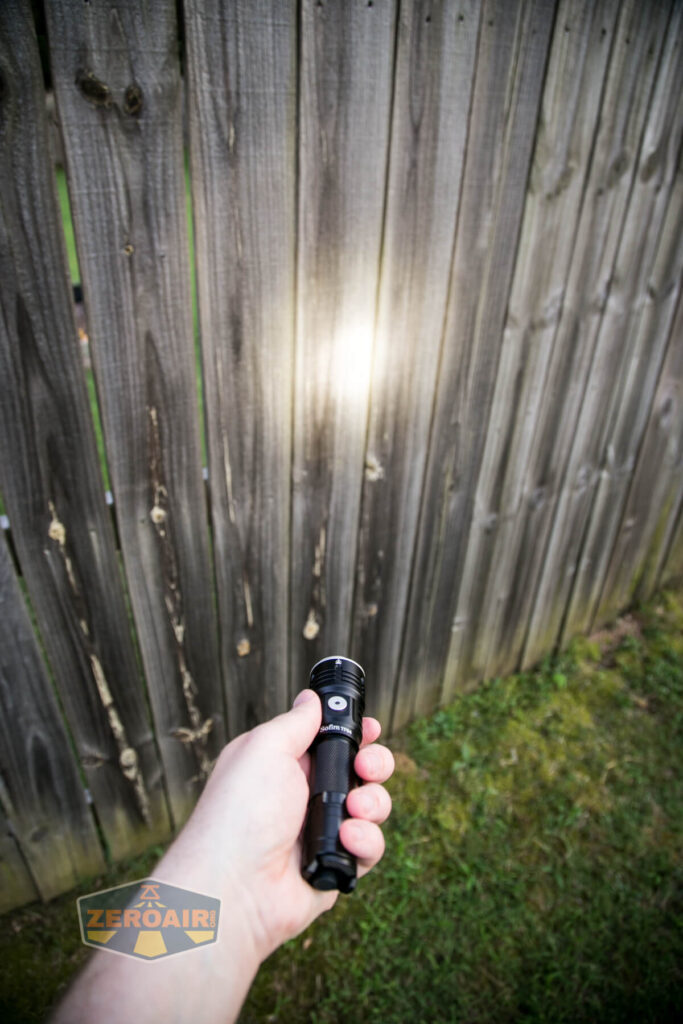 These beamshots are always with the following settings:  f8, ISO100, 0.3s shutter, and manual 5000K exposure.

I compare everything to the KillzoneFlashlights.com 219b BLF-348 because it’s inexpensive and has the best tint!